The purpose of Protest – A key tool for the Witness and Equalizer: The example of Colin Kaepernick 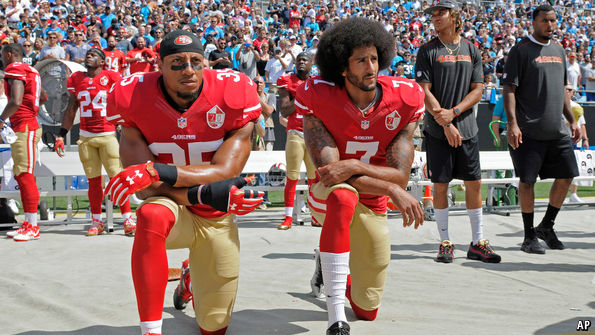 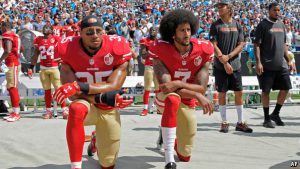 It was a bright sunny late August day in Santa Clara California.  The stadium was packed with San Francisco 49er fans.  The pre-season game was about to begin like any other National Football League (NFL) event – with the singing of the National Anthem.  The announcer’s melodramatic voice emerged through the loud speaker,  “Would you all please rise and remove your caps for the singing of our National Anthem.” Reverberations rippled through the stadium.  All rose.  But one.

Colin Kaepernick, once a promising star quarterback with the San Francisco 49ers, who is now relegated to back up duties on the football field, stayed seated.  His reason?  To draw attention to an injustice he felt was being perpetuated and not seriously addressed — the often violent conflict between the police and black communities across the United States.  After the game he explained his protest this way, “I am not going to stand up to show pride in a flag for a country that oppresses black people and people of color. To me, this is bigger than football and it would be selfish on my part to look the other way. There are bodies in the street and people getting paid leave and getting away with murder.”  He continued, “This is not something that I am going to run by anybody. I am not looking for approval. I have to stand up for people that are oppressed. … If they take football away, my endorsements from me, I know that I stood up for what is right.”

While some metaphorically stood with Kaepernick, particularly members of the black community, the majority of the initial response ranged from disagreement with his methodology to complete outrage and disdain.  Personal attacks began.  People called him unpatriotic. Others told him that his actions were a slap in the face to those who served, or are currently serving, in the US military.  Clearly his message was getting lost in the vehicle.  Or was it?  Interestingly, a few months prior, four of the top names in the National Basketball Association (NBA), Lebron James, Carmelo Anthony, Chris Paul, and Dwayne Wade made a similar plea during an award ceremony.  They were lauded for standing up, but the impact faded shortly thereafter.  Each was a form of protest.  Why did one fade while the other persists and moves people to take sides?

The difference was that Keapernick used an exceedingly powerful symbol that many Americans hold dear – the National Anthem and the American Flag – to make his point.  His actions certainly garnered attention from many places.  People were quick to take sides.  While some labeled Kaepernick unpatriotic others, many from the military, came to Kaepernick’s defense.  As one group of military veterans on Twitter put it, “As a veteran, @Kaepernick7 ‘s protest is a beautiful part of what we fought for: free speech and perfecting our union #VeteransForKaepernick.”

What has happened as time has worn on is also important to note.  The conversation continues to slowly move from the vehicle – not standing for the National Anthem — to the message of what Kaepernick is pushing against.  And Kaepernick, himself, is not wavering. In fact, he has only recalibrated his actions to better communicate his message. After replying to Nate Boyer’s open letter to him, who is a former football player for the Seattle Seahawks and a Green Beret in the U.S. Army, Kaepernick switched from a seated position to kneeling on one knee during the play of the National Anthem. The reason for the change in position was that he did not want to disrespect the work of those from the armed forces. Moreover, the visual difference of resting on one knee as compared to sitting is important, as the latter can seem like sulking, while the former seems contemplative yet respectful.[i] He has donated over $1 million to community causes, besides speaking with athletes involved in charity work and civil-rights activists to keep the protest going.[ii]  Other NFL players are beginning to join him in a show of unity as are people of color across the country.

When we think of the Third Side, sometimes it is necessary to get an issue on the table that is being ignored or pushed down.  The role of the Witness is to pay attention to danger signals and call the attention of others to it, while the role of the Equalizer is to seek to level the playing field through protest and nonviolent action.  Kaepernick has incorporated both these roles beautifully through his actions. First, he called attention to the treatment of black lives through his gestures during the National Anthem and continued to equalize the playing field by reaching out to other athletes and civil societies to engage in the protest. Other sports stars, such as Jackie Robinson and his protest related to race in baseball as well as to the National Anthem and Muhammad Ali related to his stance against the Vietnam War, made similar statements on issues where they saw injustice.  Gandhi and Martin Luther King Jr. did the equivalent in the political realm.  The power of protest is real.  It can be off putting to many, but that is the very reason people protest.  To call attention to an issue that needs a light shown on it.  That, at the very least, is what Kaepernick has done successfully where others have failed.

No Replies to "The purpose of Protest – A key tool for the Witness and Equalizer: The example of Colin Kaepernick"