An overview of the 10 roles 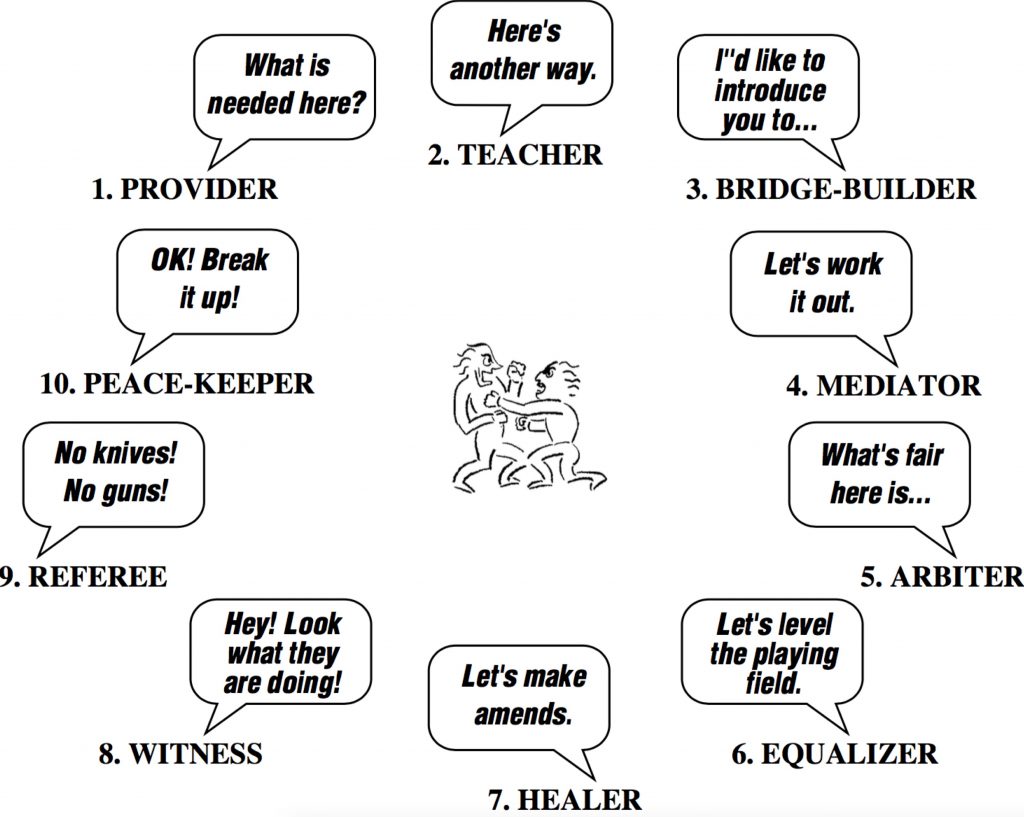 Conflict usually arises in the first place from frustrated needs, like love and respect. Frustration leads people to bully others, to use violence, and to grab someone else’s things. The most basic human needs include food (and other necessities for living), safety, identity, and freedom. If we as Thirdsiders can help people address one or more of these four needs we can avert destructive conflict. This is the role of the Provider.

Sometimes people fight simply because they know no other way to react when a need is frustrated and a serious difference arises. By helping people learn new values, perspectives and skills, we as Teachers can show them a better way to deal with differences.

Good relationships are key to preventing conflict. Anyone can help build bridging relationships across natural divides. A relationship operates like savings in the bank; whenever an issue arises, the parties can dip into their account of goodwill to help deal with it. Often not a discrete activity, bridge-building takes place all around us, sometimes without us even perceiving it – at family meals, on school projects, in business transactions, and at neighborhood meetings.

At the core of conflict are often conflicting interests. As Mediators, we can help reconcile the parties’ interests. The Mediator does not seek to determine who is right and who is wrong, but rather tries to get to the core of the dispute and help the parties resolve it. We may not think of it as mediation, but that is what we are doing whenever we listen attentively to people in dispute, when we ask them about what they really want, when we suggest possible approaches, and when we urge them to think hard about the costs of not reaching agreement.

Sometimes mediation is not enough to resolve a dispute or is not appropriate because basic rights are being violated. Whereas a Mediator can only suggest a solution, an Arbiter can decide what is right. The Arbiter is a familiar role, embodied in the judge in the courtroom or the arbitrator in a work setting. More informally, the Arbiter is the teacher deciding a dispute among two quarreling students, the parent ruling on a matter involving two children, or the manager determining an issue among two employees. In this sense, we are all potential arbiters.

Every conflict takes place within the larger context of power. Imbalance of power often leads to abuse and injustice. The strong refuse to negotiate with the weak or to submit their dispute to mediation or arbitration — why should they, they think, when they can win? This is where the Equalizer has a contribution to make. Each of us holds a packet of power, a measure of influence over the parties around us. Individuality, our influence may be small, but collectively, it can be considerable. We are capable of empowering the weak and the unrepresented so that they can negotiate a fair and mutually satisfactory resolution.

At the core of many conflicts lie emotions — anger, fear, humiliation, hatred, insecurity, and grief. The wounds may run deep. Even if a conflict appears resolved after a process of mediation, adjudication, or voting, the wounds may remain and, with them, the danger that the conflict could recur. A conflict cannot be considered fully resolved until the injured relationships have begun to heal. The role of the Healer is to assist in this process.

Destructive conflict does not just break out but escalates through different stages, from tension to overt conflict to violence. By watching carefully, the Witness can detect warning signals, which, if acted on, can prevent escalation of conflict and even save lives. A Witness can also speak up to persuade the parties to cease fighting and sound the alarm to call the attention of other Thirdsiders who can intervene as Mediators, Peacekeepers, or other Witnesses.

Some fighting can be salutary. Fighting can serve the function of clearing the air and bringing suppressed problems into sharp focus. If and when people do fight, it is important to reduce the harm. That is the role of the Referee, who sets limits on fighting. Parents know this role well: “Pillows are okay, but fists are not.” “No blows above the neck or below the belt.” As Referees, we can change the way people fight, replacing destructive weapons and methods with substantially less destructive ones.

When the rules are broken and the limits on fighting exceeded, the community needs to employ the minimally forceful measures necessary to stop harmful conflict in its tracks. The role of Peacekeeping need not be limited to specialists like the police and UN Peacekeepers, it is a community function that anyone may be called upon to play. When two children fight, adults can step in the middle and, if necessary, physically pull the two apart. The best Peacekeepers never fight. They never fight because they don’t need to. They accomplish their ends by intervening early and using persuasion.