Mosques do the Opposite of Terrorism: They Diffuse Peace and Dialogue 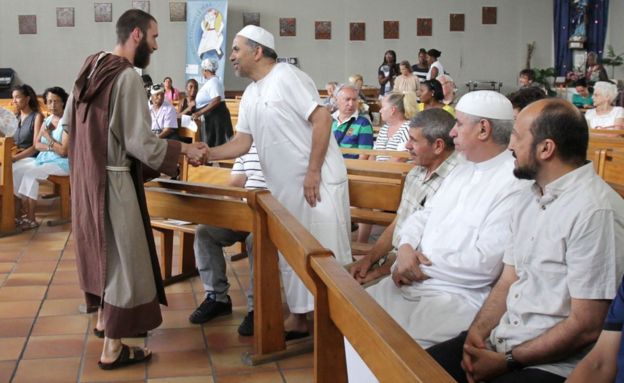 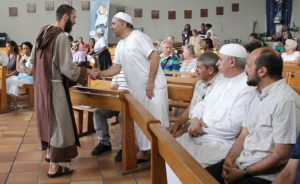 …said Mohmmed ben Mohammed, a member of the Union of the Islamic Communities in Italy, in the aftermath of the bloody attack on the Saint-Etienne-du-Rouvray Church near Rouen, about 77 miles away from Paris. Many from the Muslim community in the Rouen region, in France, reached out in solidarity to the victims and the family of those affected. It is in times of crisis that we can distinguish our friends from our foes. It is also in times of crisis that the Third Side principles become so very crucial, that the creative people and communities automatically and unthinkingly adopt them.

It was a peaceful morning Mass headed by Father Jacques Hamel, who was filling in for the regular priest Auguste Moanda-Phuati, at 9:25 am local time on July 26, 2016,[i] when two knife-wielding men stormed into the Church. One of them forced 86-year old Father Hamel to his knees and slit his throat, while the other recorded the whole incident, as they shouted, what seemed like, a sermon in Arabic.[ii] These men had also positioned three hostages in front of the Church, as human shields, to prevent the police from storming through the doors. As two nuns and a parishioner exited the Church, the captors charged at the police shouting, “Allahu Akbar” (God is great), when they were shot dead.[iii] The terrorist organization, IS, later claimed responsibility for this bloody event.[iv]

One of the first communities to respond against this attack was the Muslim community, led by France’s Muslim Council (CFCM), which urged Muslims to show “solidarity and compassion” in the face of the murder.[v] The words of Anouar Kbibech, the head of CFCM, “We are all Catholics of France,”[vi] summed up where the Muslim community’s loyalty and support lay. “For me it is very important to be here today. It should be shown physically, because until now the Muslim community did a lot of things that were not seen. Today we wanted to show physically, by kissing the family of Jacques Hamel, by kissing His Grace Lebrun in front of everybody, so that they know that the two communities are united,”[vii] said Mohammed Karabila, President of the Saint-Etienne-du-Rouvray mosque, in Rouen. The 50 Muslims who joined the 350-strong gathering for the vigil at Saint-Etienne-du-Rouvray’s second Church on the Saturday following the attack clearly embodied the words of Mohammed ben Mohammed that, “Mosques are not a place where fanatics become radicalized. Mosques do the opposite of terrorism: they diffuse peace and dialogue.” This show of unity was repeated on multiple occasions: with Muslims attending Mass in Rome, Italy and Imams occupying the front rows of the service, and the significant show of support of the predominantly immigrant Muslim population attending Saint-Pierre-de-l’Ariane for the Mass conducted after the Nice attacks.

These acts of togetherness come despite perceptions of discrimination against Muslims[viii] by the community in France, the strong laws in France that prohibit the external show of religious symbols[ix] that the Muslim community chafes against, and the prolonged systemic economic inequalities that have beset the immigrant Muslim population since their migration to France in the 1970s.[x] Despite these setbacks, the Muslims in France have extended their hands in friendship, solidarity, compassion and mourning to those affected, and have bridged relationships across the invisible, but tangible lines of ethnic and religious differences.

However, it takes two hands to clap. In a gesture of reciprocation, the Archbishop of Rouen, Dominique Lebrun, said, “We’re very touched. It is an important gesture of fraternity. They’ve told us, and we know they’re sincere, that it’s not Islam that killed Jacques Hamel.”[xi] These newly fortified relationships can be further bolstered through joint projects that could help address the rapid radicalization of youth in the region, who act out against the inefficiencies and inequities in the prevalent socio-cultural structures. For example, in a study conducted in France, it was found that anti-Muslim discrimination exists in the French labor market, wherein a Muslim candidate is 2.5 times less likely to receive a job interview callback than his or her Christian counterpart.[xii] Correspondingly, second-generation Muslim households in France have lower incomes compared to their Christian counterparts.[xiii] This results in a sense of stagnation felt by the community which migrated in the 1970s, and occupied housing projects when the economy was booming, but continue to find themselves living in the same location 40 years later after all the work has dried up.[xiv] But by reaching across invisible, but tangible, barriers both communities have played the role of Bridge-Builders, at a time when both communities need the other’s support and care, in ways that can be provided only by neighbors.

This gesture of fraternity would go a long way in helping both communities become Providers. In this role, they provide each other respect for the other’s religious beliefs and ways, emotional succor and understanding in times of grief, and support to build an inclusive community that fosters peace and dispenses with the urge for violence. Most of all, the acts of kindness, compassion and understanding that the communities display towards each other, helps heal long-festering wounds. In this way, the communities act as Healers – not just healing each other and themselves, but through their example show that their religions can be a force for good, and one that trumps evil.

[viii] “Why did France become a leading target for extremists?”, available at http://www.npr.org/sections/parallels/2015/11/21/456805336/how-did-france-became-a-leading-target-for-extremists

No Replies to "Mosques do the Opposite of Terrorism: They Diffuse Peace and Dialogue"