Women and Non-Violent Resistance: The Missing Narrative in Our Evolving Histories

History has been replete with conflict and resistance to oppressive powers. Our memories are inundated with images of burning vehicles, people on the streets throwing Molotov cocktails and gunfire to control such resistance. It is true that violent images are more gripping, hence they are more newsworthy and are covered by the media. They are sensational, striking and such images are usually more easily seared into the minds of the collective psyche.

However, this is only one part of our evolving histories. The other, more ubiquitous and, non-violent versions of such struggles are often overlooked. Despite the less glamorous nature of the non-violent struggles, studies have proven that the percentage of success achieved by non-violent campaigns have historically been, and even currently are, higher than violent struggles. In a study aggregating and comparing the percentage of success of non-violent and violent resistance movements from 1900 to 2015, it is seen that non-violent campaigns had 51% higher chance of being successful as opposed to the violent movements.[1] 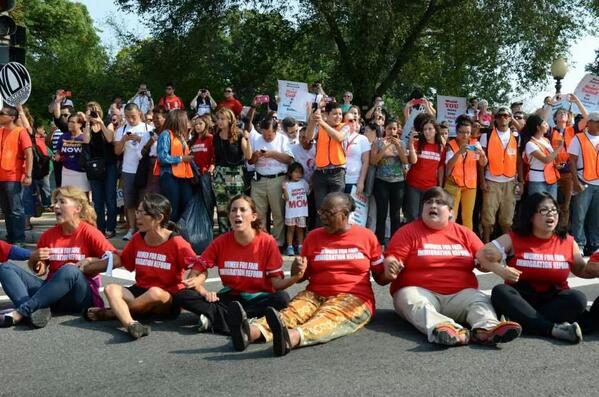 Women have traditionally been the more oppressed of the sexes in almost all of our societies. As the Brazilian documentarian, Julia Bacha puts it, because women experience power differently, they have also needed to use indirect ways of achieving their rights, as opposed to direct confrontation from more powerful actors.[5] When nonviolent struggles are initiated in a society, they are more often than not spearheaded by women; at the very least, non-violent campaigns have the active participation of women. Interestingly enough, studies have also determined that a society is more likely to adopt a non-violent resistance movement when it has a more inclusive attitude toward women’s role in society.[6] In short, when more women are at the helm of a resistance movement, it tends to be less violent and more inclusive of all marginalized sections in the society.

In today’s day and age, it becomes particularly crucial to pay attention to the non-violent struggles lead by women for multiple reasons. First, by paying attention to such movements, we’re offering up more leaders and role models to play active roles in a society’s public life, who may have very creative, innovative and less destructive ways of achieving their goals. Second, as Julia Bacha puts it, these stories that we share and spread will determine how we choose to wage conflict. And it is possible that when more people are aware of the non-violent struggles lead by women, that they may choose to wage their conflicts in more peaceful, democratic and effective ways.

No Replies to "Women and Non-Violent Resistance: The Missing Narrative in Our Evolving Histories"