The Power of the Third Side: An Interview with Pablo Lumerman 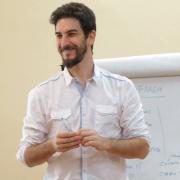 Pablo Lumerman is a dialogue and development facilitator and a community-company-government conflict mediator. Pablo holds a degree with honors in Political Science from the University of Buenos Aires. He also holds a Master’s in Local Development from the National University of General San Martín and the Autonomous University of Madrid.

Source: Lindie Botha (2016). The Power of the Third Side: An Interview with Pablo Lumerman. Reflections from Practice Series No. 08 (B. Ganson, ed.). The Hague: ACCESS Facility. View the original article >>

What is one of the more significant challenges or dilemmas you face when you are facilitating company-community dialogue?

In my work as a conflict transformation practitioner I’ve tried to bring together two dimensions: The facilitator and the activist. My role is not just to mediate and manage conflict, but also to transform it. A key challenge is how to intervene in conflict in ways that create an environment that is more just, and more peaceful, than when you started.

This requires changes in people, their relationships, and systems. Governments and corporations need to come to terms with how they will protect and respect human rights. All the parties have to anticipate and plan for future conflicts and events that may unfold a decade from the current dialogue. New capacities and institutions may need to be built.

To facilitate dialogue among communities, companies and government is an intense process. The actors directly involved are sometimes very angry and biased against each other. They often fail to see beyond the current conflict. In this type of situation, the scope of your impact – as a single voice proposing a collaborative approach to conflict transformation – can be limited. You struggle to influence the negotiation agenda and get the right people into the room.

So to inspire structural change, you need to build a wider power base – but not power in the traditional sense. Using ideas from William Ury’s concept of Third Side facilitation, I draw on the power of collective intelligence and positive peer pressure. A group that harnesses its collective moral imagination can develop a better perspective on the future and change conflict-prone patterns.

What is an example of this challenge?

A sustained mediation effort among the oil industry and indigenous communities.

In the region where I live in Argentina, I was contracted to facilitate a dialogue among companies, local government and indigenous communities. Environmental and land disputes had erupted around the massive influx of investment for shale gas extraction, commonly called fracking.

When I started, I felt that I had little legitimacy beyond the immediate managers and community leaders involved in the process. There was a clear risk that any agreement we could get from the table would be fragile. Communities and companies were used to resolving conflicts between themselves without government involvement. These negotiations were typically opaque and not conducive to conflict transformation.

When I proposed a negotiation agenda, I first made sure that the local communities trusted me. I also insisted that government officials get involved. That was my starting point, wearing my human rights activist hat, reaching out beyond just the leaders at the table. I started to develop a citizen-based platform, including indigenous leaders, members of sub-contracting firms, government officials and even academics. It became a bigger process involving more people, beyond just the parties negotiating around the table.

This can make the powerful actors uncomfortable. They realize that the process is not just cosmetic, but about changing the pattern of how the parties relate to each other and how people access justice. So I then worked to reduce the pressure felt by government and company officials. I helped them to acknowledge that there are also structural aspects to the conflict, such as deep power asymmetries, that are not solely their responsibility to address. I introduced the idea that the mediation is a collective effort, and not just the responsibility of a few representatives. It took the burden away from them to quickly “solve” the problem.

How did this impact the parties’ ability to achieve rights-compatible, interest-based outcomes?

Over time, adversaries are becoming collaborators.

In the beginning, polarization was intense. The corporate lawyers warned about the risk of opening a space for dialogue. The activists talked about justice and resistance in the streets. People got trapped in a binary world plagued with mistrust and mutual demonization. Everything turned into us against them.

I needed to help the actors to transcend their negative emotions and patterns of confrontation. This was where the citizen multi-sector platform played a role. One purpose of the platform was to empower the “doves” to persuade the “hawks” to engage in dialogue. It consisted of close to forty members and included three levels of government. Platform participants shared concerns and visions for the future, built bridges, and most of all, established relationships of trust. They helped companies, communities and government change from adversarial parties to collaborators.

The platform is now an entrenched part of how corporate and government officials, as well as civil society leaders, deal with conflict and sustainable development. Bilateral agreements are slowly being replaced by transparent mediation and dialogue. Before the platform was established, companies had a very disparaging narrative about community dialogues. They had a perception that local people only wanted money. Nowadays, companies recognize the legitimacy of community claims from a rights-based perspective.

That is what Third Side mediation is all about: Tapping into people’s collective transformational energy. Then you are no longer the only activist or facilitator. Champions emerge who will go back to their organizations and advocate for the mediated decisions to be implemented. They will challenge the skeptics and “spoilers” who sometimes try to derail the process due to fear of losing control. When people work together and act collectively, power is balanced and possibilities open up.

No Replies to "The Power of the Third Side: An Interview with Pablo Lumerman"